Background: We have previously described mosaic mutations in the RNase IIIb domain of DICER1that display global developmental delays, lung cysts, somatic overgrowth, macrocephaly and Wilms tumor. This constellation of phenotypes was classified as GLOW syndrome. Due to the phenotypic overlap between GLOW and syndromes caused by mutations in the PI3K/AKT/mTOR pathway, we hypothesized that alterations in miRNA regulation of this pathway cause its specific constellation of phenotypes.

Methods: We developed HEK293T cells with loss of exon 25 in DICER1, a genetic modification that is synonymous with the “hot spot” RNAseIIIb mutations that cause GLOW syndrome. We assayed the cells for activation of the PI3K/AKT/mTOR signaling pathway.

Results: We observed activation of the PI3K/AKT/mTOR pathway as demonstrated by increased pS6Kinase, p4EBP1 and pTSC2 levels. Additionally, these cells demonstrate a striking cellular phenotype, with the ability to form spheres when the serum is removed from their growth medium. The cells in these spheres are Oct4 and Sox2 positive and exhibit the property of reversion with the addition of serum. We queried miRNA expression data and identified a population of miRNAs that increase due to these mutations and target negative regulators of the PI3K/AKT/mTOR pathway.

Conclusion: This work identifies the delicate and essential role for miRNA control of the PI3K/AKT/mTOR pathway. We conclude that the phenotypes observed in the GLOW syndrome are the result of PI3K/AKT/mTOR activation. 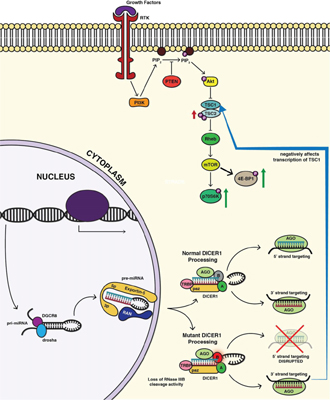