Methods: Two reviewers individually evaluated the articles which collected relevant information including genes and miRNAs involved in the transformation of endometriosis into ovarian cancer. To assess the mature sequence of miRNAs and also their chromosomal positions, miRPathDB software was employed. To determine the main target gene predicted for each considered miRNAs, the TargetScanS Web server was applied. The interaction of each gene with other genes associated with endometrial- related ovarian cancer was determined by GeneMANIA software. Finally, to design integrated model of miRNAs-targeted genes interaction network, the Cytoscape software was used.

Results: The final number of studies available for analysis was 6 manuscripts including 22 miRNAs described as involved in the transformation of endometriosis into different subtypes of ovarian cancers (14 miRNAs up-regulated and 8 miRNAs down-regulated). Three miRNAs of miR-141 (upregulated), miR-205 (down-regulated), and miR-125b (down-regulated) were revealed as the originator for genetic interactions leading to carcinogenesis. We could show some common loops and pathways including uncontrolled cell proliferation and abnormal apoptosis (mediated by PTEN gene induced by miR-21 and miR-214), and disaggregation and epithelialization (mediated by ZEB1 and ZEB2 genes induced by miR-200). 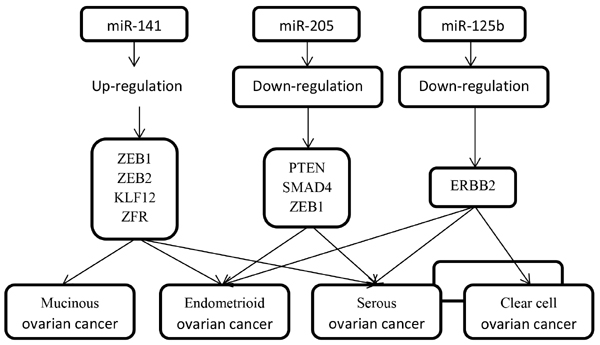