Background: B7-H4 is a novel immune checkpoint protein that negatively regulates T cell activation and function. It is overexpressed in many malignant tumors, including Breast Cancer (BC). It was reported that the presence of the single nucleotide polymorphism rs10754339 (A/G) within the 3' UTR of the B7-H4 gene has a great influence on the risk and progression of BC as well as lymph node metastasis. On the other hand, mounting evidence demonstrated the potential of miR-506-3p to be employed in the diagnosis and treatment of a wide range of human malignancies. It is frequently down-regulated in BC despite its tumor suppressor role. Moreover, Myc, E2F and Rb proteins are key players in cell cycle regulation. In BC, the CDK-RB-E2F axis is extensively deregulated by several genetic mutations. Additionally, the potent proto-oncogene Myc is highly expressed in BC.

Aim: The main aims of the study were to investigate the potential role of miR-506-3p in the regulation of B7-H4 SNP rs10754339 (A/G) in BC and to uncover the influence of miR-506-3p on cell cycle and tumor progression in BC cell lines. 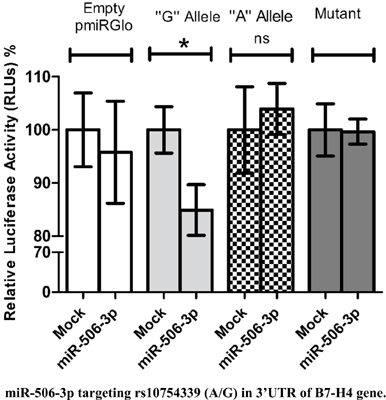